Kanpur is the 12th most populous city in India. It is the administrative headquarters of Kanpur Nagar district and Kanpur division. It is the second largest industrial town in north India, following Delhi.Kanpur District was divided into two district namely Kanpur-nagar and Kanpur-Dehat in year 1977. Reunited again in year 1979. Again separated in year 1981.

Kanpur is the biggest city of the state and is the main centre of commercial and industrial activities. Formerly it was known as Manchester of India. Now it is the commercial capital of Uttar Pradesh.
It is situated on the most important national highways no. 2 & 25 and state highway, the main Delhi-Howrah railway trunck lines & at the bank of holy river Ganga. It is about 126 meters above the sea level. Presently The nearest civilian air port Amausi (Lucknow) is 65Km. away from Kanpur.Kanpur is also divisional headquarter of Kanpur commissionery consisting of following districts: kanpur-Nagar,Kanpur-Dehat,Etawah,Aurayia,Farrukhabad,Kannauj.

The Bengali diaspora communities in Eastern Uttar Pradesh, Bihar and Jharkhand are mostly composed of Brahmins and some other (for lack of a better term) “upper castes”. Most of these moved to these places in the colonial period, starting as sepoys in the early nineteenth century and continuing as petty clerks in the administration, teachers and later, doctors, lawyers and officers in companies and businesses. Most of this stemmed from the “early adopter” advantage that the forward caste Bengalis had when it came to adopting Western education.

A big reason for Bengalis migrating to Kanpur is the fact that Bengal was the first Indian province that came under British rule and large swathes of Northern and Eastern India continued to be ruled from Calcutta for a long time. The cities of Varanasi and Allahabad too were in the British empire since the early nineteenth century, and the cities of Agra, Kanpur and Lucknow were added in 1836 to form the “North-Western Provinces”. There is huge population of Bengalis in Bengali Mohal and Golaghat. Abhijeet Bhattacharya, a popular singer of Bengali origin belongs to Kanpur.[2][unreliable source?]

There was presence of Punjabis in Kanpur before independence. Majority of them were indulge in industrial and trade activities. After 1947 many Hindu and Sikh migrants arrived at Kanpur from Pakistan. Govind Nagar, Gumti No. 5 and Harjinder Nagar are important Sikh localities in the city. After 1984 anti-Sikh riots, many Sikh left to Punjab and Delhi thus decreasing the population of Punjabis. Hindu Punjabis are concentrated mainly all around the city with heavy population in Krishna Nagar and Shyam Nagar in the eastern part of city. Some Muslim Punjabi communities like Bisati and Shamsi are also found in the city who are indulged in leather business and other trades. The Punjabi Mahapanchayat was formed in the city in 2008 to protect and safeguard the rights of Punjabis.Hard Kaur, a popular Hindi and English rap singer of Punjabi origin belongs to Kanpur. Actresses like Poonam Dhillon and Kritika Kamra also belong to the city.

Gypsies started migrating to Kanpur from Rajasthan villages due to scarcity of water there.A group of gypsies along with 6,000 sheep, 100 camels and 20 dogs settled in Sirhi Itara village which is in close proximity from the city.[6]

There are more than 250 Gujarati families with population roughly equal to around 3000. The Gujarati Samaj is the oldest and apex body of the community in the city. It was established 115 years back when Magan Lal Savla came to the city and set up his own business. The Savla family migrated about 10 decades ago and since has well established business in the city. Gujarat Bhawan situated at Nayaganj hold their important cultural and religious events every year.

In late 18th century there was a large population of Portuguese people in the city which included traders and businessmen. When the city was captured by British forces most of the Portuguese left the city. The old Portuguese graveyard or Kutchery Cemetery is situated at VIP Road where Archaeological Survey of India‘s office is present.[8] At present there is small population of Portuguese scattered across the city. Brian Silas, a popular piano player and musician belongs to Kanpur.[9] Miss Silas, singing and music teacher at St Mary’s Convent Girls School, the oldest convent school in the city also has Portuguese ancestry.[10]

A portrait of Nana Sahib at the Peshwa Memorial atop Parvati Hill in Pune, India

Kanpur is home to more than 2000 Marathi families.[11] The approximate Marathi population in the city is around 20,000. The reason of the vast population of Marathis is because of the presence of Nana Sahib, a Maratha freedom fighter at the small town of Bithoor (about 25 km from Kanpur). Every year Marathis celebrate Ganesh Chaturthi which is also celebrated with great enthusiasm among local population as well as Muslims.[12] Maharashta Bhawan situated at Khalasi Lines is an important Marathi cultural centre in the city. The building was vandalised in the year 2009 by angry Bihari mobs who were protesting the persecution of Biharis in Maharashtra.[13]Veena Sahasrabuddhe, a popular Chitpavan Brahmin was born in Kanpur in 1948.

Once a strong community with population above 800,at present there are 35 Parsis in Kanpur with their Fire Temple at The Mall. Most of the Parsis belong to Javeri family who came to the city as industrialists before independence.[14][15][16]

There is small population of South Indians concentrated all over the city. Most of them migrated to the city for job and education purpose and have permanently settled in the city.Most of them belong to Christianity and Hinduism religions. Malayalis and Tamils are more in population as compared to others.

In 1951 there were 9000 Sindhi people in Kanpur.[17] Today there are about 1.5 lakh people of the Sindhi community in the city most of them merchants and businessman.[18] They migrated to the city during partition in 1947. There is large community of them in Sindhi Colony in Shastri Nagar locality of the city.Satish Mahana, a prominent politician and social worker of the city belongs to Sindhi family.[19]

Iraqis are community of Muslims who migrated to the city in the late 18th century from Eastern Uttar Pradesh. They have historic Iraqi origin, believed to have come to Indian in the 16th century from Sindh where they migrated in 712 AD during Arab conquest of Sindh by Muhammad bin Qasim.[20] They are mostly indulged in leather business and trade. They have majority population in Jajmau area of the city where leather tanneries are concentrated in large amount. Presently their population in Kanpur is estimated to be above 30 thousand. Most of the community members speak Bhojpuri and maintain a strong affiliation with their Eastern UP roots with many still having ancestral houses in the Bhojpuri belt of UP. About 80% of the tanneries are owned by the Iraqi population and provides employment to over 2.5 lakh people

The Anglo Indian population in the city is estimated to be above 5,000. Though, a strong thriving community of the city before independence with population more than 10,000, now they are only found in some pockets of the city like McRobertganj, Khalasi Lines, Maxwellganj, Green Park, Cantonment, Allenganj, Swaroop Nagar, Permat, Gwaltoli, Nawabganj and Arya Nagar. The All India Anglo Indian Association of the city has its headquarter near UKCA School or Sheiling House. Even though they have preserved their culture, many have mixed with local Christian population. Jamed Douglas Binge is the current chairman of AIAIA Kanpur and senior most Anglo Indian of the city. Bob Woolmer, an eminent cricket player belonged to an Anglo Indian family of the city. 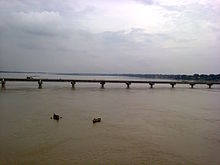 The city has had chronic problems with maintaining local roads.There are several important National Highways that pass through Kanpur.

The Inter State Bus Station (ISBT) of Kanpur officially named as the “Shaheed Major Salman Khan Bus Station”. It is locally known as the “Jhakarkati Bus Station” enquiry number: 0512 2328381. It provides buses to important cities of India. The other bus stations are:[23]

The National Highways Authority of India (NHAI) is all set to develop a four-lane outer ring road along the periphery of Kanpur with an aim to prevent traffic congestion in the industrial city caused by long-distance heavy vehicles. The new road, which will help the heavy vehicles to bypass the city, will be developed on a “Built, Operate and Transfer” (BOT) basis under the phase-VII of National Highways Development Programme (NHDP).[24]